After a fairly seasonable winter through the end of 2009 in Southeast Alaska, 2010 soon broke into what many old-timers call a “January thaw” that seems to want to be known as a “January-February thaw.” Ketchikan has been warm and wet, double the precipitation but ZERO snowfall in January. Juneau has had about 50 inches so far this winter (1/3 last year’s running total) but it has melted to bare ground yet again. Here in Haines we’ve had above average snow on the ground but people are complaining because it’s wet, rather than the mostly dry stuff of the last three winters. (OK we’re spoiled). What is going on here? There are answers on several levels…I’ll try to hit three: 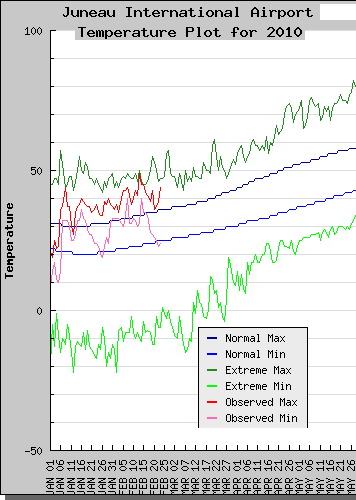 Above freezing temperatures have never been too rare, even in mid-winter, in SE AK (sometimes referfed to as the banana belt of Alaska). In 1977 Juneau had 29 consecutive days with highs 40F (5C) or higher starting on Jan 30. In January, Juneau averages about 16 days where the high breaks 32F (0C) and 19 in February. Roughly 2/3 of the panhandle is warmer yet. But since the past several winters have been fairly “wintery” with typical or colder temperatures and plenty of snow (record amounts in some cases), the contrast is hitting us. Summary: yes, it’s a long warm spell, and some records are falling, but it’s not an unprecedented or even all that unusual situation.

So why does SE AK get these warm spells and what’s causing this one? Stay tuned…that’s why #2 and we’ll explore that in the next post.