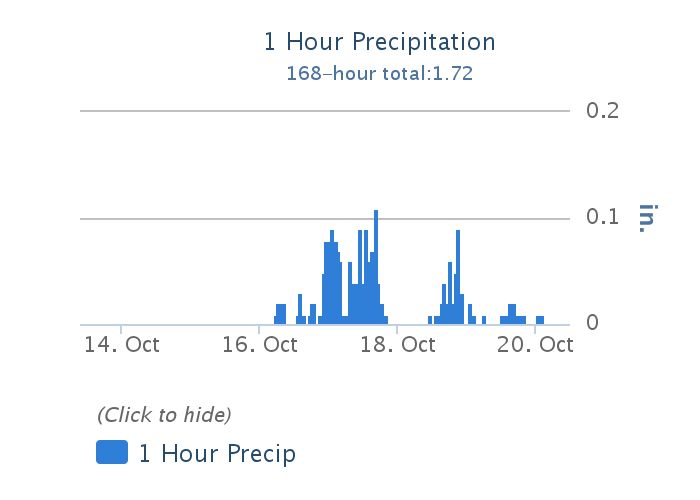 Of all the weather elements, precipitation seems the most chaotic when it comes to spatial and temporal patterns. In reality, I think wind is probably more variable over both time and distance, but I guess we must understand that, since we don’t talk about it nearly as much as peculiar precipitation patterns such as long wet or dry periods, heavy precipitation events, adjacent areas getting very different amounts or types of precipitation, etc. When do these peculiarities rise above perception and prove to be truly unusual? Fortunately we have data from most Alaskan towns to separate “normal” variations from “exceptional” ones. This month already offers a couple events that people have been talking about. Let’s check them out.

October is climatologically the wettest month in wet Southeast Alaska; going two weeks without any moisture falling from the sky strikes most people here as quite unusual. But thanks to an omega block (see below), most stations in the northern panhandle and eastern Gulf coast (from around Juneau north and west almost to Prince William Sound) went 16-18 straight days without precipitation (I’ve allowed trace amounts, but most locations had very few if any trace days). It was quite dry in the entire Eastern half of Alaska during that period due to the blocking pattern, but it’s normally drier once inland from the first set of mountains. The normally wet coastal area mentioned above, centered around Yakutat was the real outlier. Here’s a graph of the accumulated precipitation at Yakutat. The green line is 2016…very close to “normal” (smooth brown line) all year until late September:

Was this dry spell a rarity?

It was very unusual, but not unprecedented. Here are the stats for both Yakutat and Haines (I’ve used the longer Haines Airport record instead of the coop station for this graph.) In October it’s only happened once in Yakutat and twice in Haines over the period of record available (94 years of more or less complete but not contiguous data for Yakutat and 76 years for Haines.) [You may note that the graph appears to show only one event for Haines in October. The reason is that the 2016 event started in September but was mostly in October. The graph shows the start date for each period. I checked the dates to be able to include it as an October event in my narrative.]

A foot or more of snow in mid-October

When the dry spell broke, Haines did it in style, with about a foot of snow falling in a little more than a day (19 inches (48 cm) at the border station, about 40 miles (60 km) NW of Haines). Juneau got about 6 inches (16 cm) at the airport, somewhat more in areas farther from the water. Four and a half inches (11 cm) fell at Hoonah and not enough to mention elsewhere, except I’ll mention Skagway, since they are only about 15 miles (20 km) from Haines, but officially got only a trace of snow. Here’s a couple mini graphs for Haines:

How did this early snow stack up against previous years?

Haines: 2nd most 1- or 2-day snowfall in October over the last 17 years (that’s all the snow data I had available while writing this up).

Even with the fairly short records, I’d call it an unusual, but again, not unprecedented event for October. If you compare either station’s snowfalls to those of any past month, they move way down the list, 50th to 100th kind of rankings. The heavy snows tend to come in November through March.

Another way of looking at it: Haines Customs and Haines townsite have taken an early 1-2 lead in the last great snow race…no other reporting stations in Alaska have gotten as much snow so far this season.

Does the early snow portend a snowy or cold winter ahead? By itself I don’t think so. But there are other signs that do skew the odds toward a cold winter, or at least one colder than the last two mild ones. More to come in another post.

I love feedback. Please use the comments feature to share any thoughts or questions.

One thought on “Precipitation patterns & perceptions”